I started this blog out of a fondness for getting pished on whisky with friends, and in embracing this fondness I have since spent far too much money – or not enough, it depends if you are speaking to myself or The War Council – without actually keeping track of what I’m drinking, who with, where I have drank it, and if it was worth drinking again. In the 6 years since I got in to whisky, I have done tours, started a Whisky Club, unwittingly bought fakes, found hidden gems, spent an inordinate amount of time viewing auctions, and have come away with a depth of knowledge which barely skims the surface of what the world of whisky entails.

Therefore, I hope in my witless musings, below-average reviews, and tedious posts, that I can keep some kind of written history which I can look back on, with my head in my hands, and think, “What a load of pish”. Should anyone read what I post and find it in any way enjoyable or informative, then I suppose that’s a positive.

Anyway, even though I prefer Whisky, I now live in Belfast, which means I often encounter our Irish cousins and their popular drams with the added E. It feels fitting to start the first post with a recent tour and tasting that I went on with the Whisk(e)y Club, and because I am bereft of good starting points…

Bushmills is the world’s oldest licensed whiskey distillery, dating back to 1608 when a license to distil was first granted by King James I. In 1784 the Old Bushmills Distillery was established, which is the company we know today, and for the next 100 or so years the distillery would operate on-and-off . A fire in 1885, which destroyed much of the distillery, preceded the distilleries ‘golden years’. Since then, the distillery has operated continuously and the Bushmills brand has become synonymous with Ireland and whiskey, and alongside Jamesons is the Island’s biggest-selling whiskey.

So, it seems as good a place to start as any.

Based just over an hour from Belfast, the distillery and surrounding village is situated on the North coast in an area of outstanding natural beauty. With the Giant’s Causway, Dunluce Castle, and multiple scenic villages along the coast such as Portrush, there’s numerous places to enjoy the area. We opted to rent an Airbnb for the 5 of us in Portballintrae, travelling up late morning on the Saturday. Port Ballintrae is a 20-minute walk from Bushmills, however we opted for a local taxi which will get you there in 5 minutes or so. There’s very little in Portballintrae by way of entertainment, however the views and beach make up for this, and there’s also the Bayview Hotel which has an impressive array of Scotch, with an abundance of Islays (Lagavulin, Bruichladdich, Laphroaig etc). Given our choice of evening entertainment was whisky tasting and board games, the lack of nightclubs didn’t prove to be too much of a hindrance.

Note: Not our Airbnb, unfortunately.

With over 120,000 visitors a year, the distillery tour is one of the most popular things to do when in Northern Ireland. Bushmills only take bookings for group numbers that are 15+, so during peak tourist times, such as during the summer, it’s best to turn up earlier to ensure you can book a time slot. The normal tour costs £9 per person, with a dram at the end, either from the 12-Year Old Distillery Exclusive or the Bushmills Original.

Prior to beginning, there is a waiting area at the welcome centre with information on the distillery, old stills, and historic footage, to keep everyone occupied. 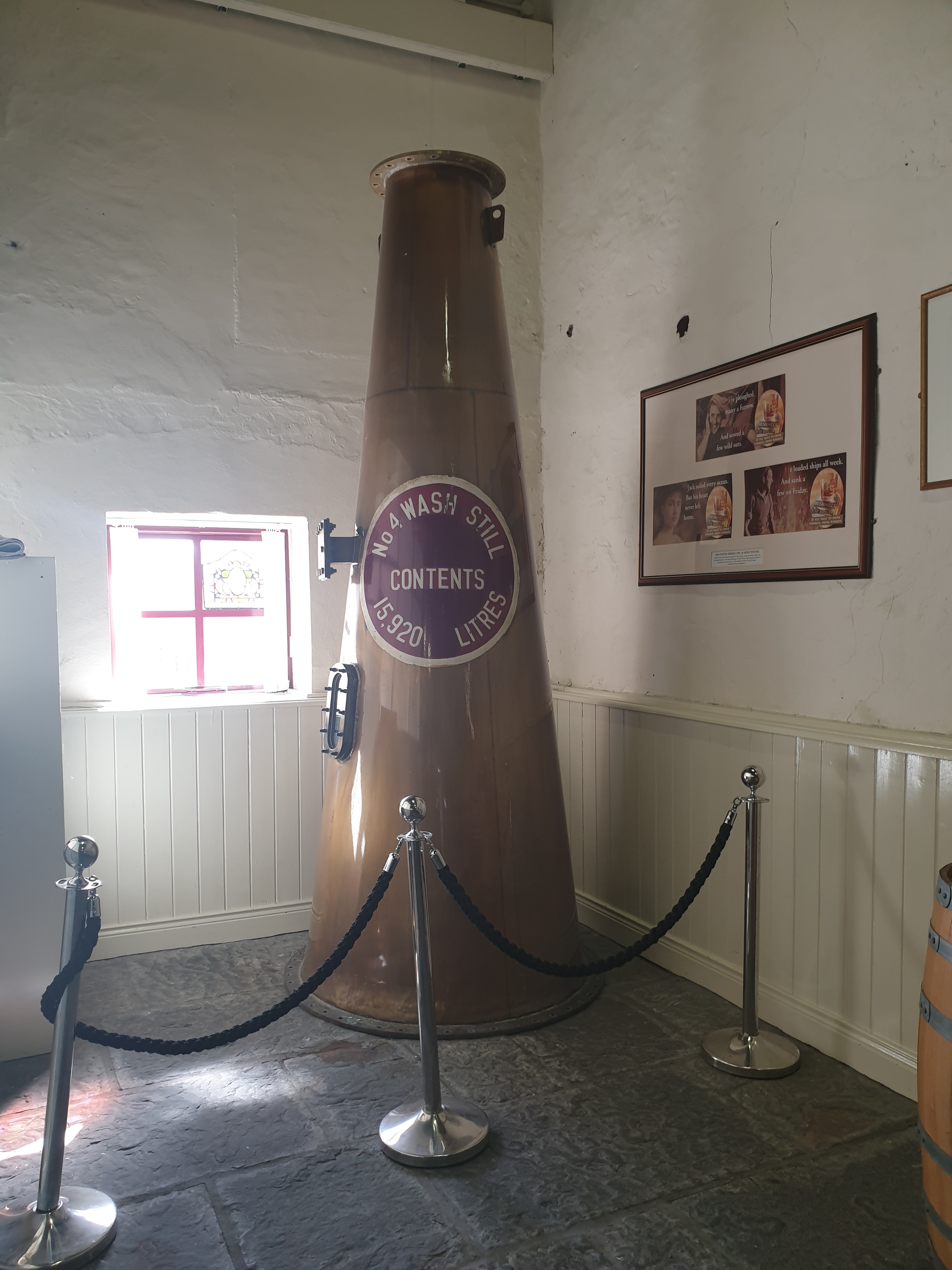 The tour itself takes approximately 45-minutes, with the group being guided through the working distillery led by an informative and good-natured guide who, having heard I had grown up a Jock, proceeded to make sure the group knew that Irish Whiskey was superior to Scotch – according to our guide, the secret to Irish whiskey’s supremacy is that it is Triple Pot Distilled, which gives the liquid it’s light appearance and fruity, floral notes. With Irish whiskey production having moved away from peat a long time ago, Bushmills is a great example of a smooth, sweet whiskey.

FYI: Cameras are not allowed on the tour, so unfortunately I was unable to get any photos.

As we progressed along the tour route, we were shown the difference in casks, from Oloroso and Madeira to Bourbon, and the production line for filling casks. The sheer scale of the production operation can only really be appreciated first-hand, with the distillery running 24/7 and the stainless steel mashtun filled around the clock with malt and water (from St. Columb’s Rill – Bushmill’s water source). The distillery’s output is so large that Jameson have outsourced some of their bottling commitments to Bushmills, and they also bottle Proper Twelve, which is UFC star Conor McGregor’s poor attempt at whiskey.

At the very heart of Old Bushmills are the ten pot stills and six spirit safes that perform the famous triple distillation, with only one employee required to manage the process due to modern computing overseeing the entire distillation process.

The final part of our visit finishes in the bar which is situated next to the gift shop. As with most distilleries, there are Distillery Exclusives which are not available on the open whisky market, such as the Acacia-Matured release with a first edition run of 12,000 bottles, and the afore-mentioned 12-Year Old Distillery Exclusive.

Bushmills was also acquired from Diageo by Jose Cuervo at the tail-end of 2014, and have just had a £30m expansion for a second distillery approved, so there are exciting changes and growth happening. We were informed by our guide that they have filled old tequila casks sourced from Cuervo. and which are now maturing in their warehouse with an excitement that they could be creating something very unique and special in the coming years.

On leaving the shop, the rest of the whisk(e)y club bought 2 bottles for us to taste that night. One was the Acacia-matured DE, and the other was the Bushmills Sherry Cask from their steamship collection. I had bought along a Highland Park ‘The Dolphins’ for tasting too, so please see below the final paragraph for our reviews!

The tour is a great way to spend a few hours; it’s informative and enjoyable, with an engaging guide and tasty whiskey. It’s not hard to see how and why Bushmills is so popular with locals and tourists alike – if the chance ever arises then get yourself along.

Nose: Hints of honey with the expected fruit too, slightly peachy.

Palate: Sweet, which is to be expected, and very fruity. There are hints of sherry in there too, and a slight spice which lingers.

Finish: Strong with the spice remaining on the tongue, which is partnered by a smooth toffee/caramel note. Very enjoyable.

Nose: Quite ‘jammy’, which, for me at least, is a good sign. Wee bit of caramel too.

Palate: Fruit jam, which is almost cherry-like, is strong but not overpowering. I also pick up some oak and nuts. It’s smooth and pleasant.

Finish: Not too lengthy, very light and not reminiscent of the spice notes from the Acacia. Hints of dark chocolate complete the finish.

Palate: The light nose continues on the palate with nothing too overpowering or strong jumping out – enjoyable, with the vanilla and a bit of butterscotch present.

Finish: The light smoke fades quickly and leaves an almost candy-like taste on the tongue. A tasty daily dram!